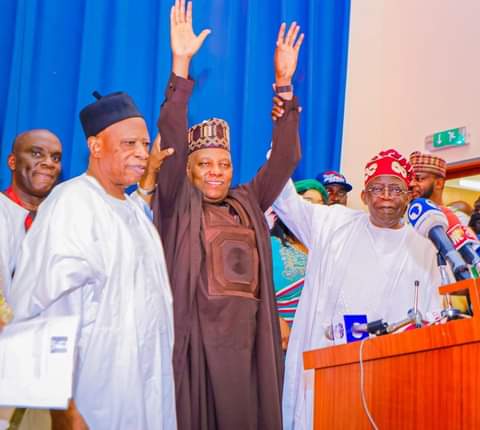 Nigeria’s ruling party, the All Progressives Congress (APC), has unveiled Kashim Shettima as the running mate to Bola Tinubu, the presidential candidate of the party in the 2023 election.
Mr Shettima, a former governor of Borno State and serving senator, was unveiled at the Yar’Adua Centre in Abuja on Wednesday.
The unveiling comes despite fierce criticisms trailing his choice as the vice presidential candidate of the ruling party on July 10 in Daura in Katsina State.
Both Messrs Tinubu and Shettima are Muslims.
Some members of the party criticised the choice, tagging it as “Muslim/Muslim.”
Among those who fiercely opposed it were a former Secretary to the Government of the Federation (SGF) and Mr Tinubu’s ally, Babachir Lawal, and the Christian Association of Nigeria (CAN).
However, the pair received approval from others.
Mr Tinubu had earlier announced Ibrahim Masari as his running mate in ‘placeholding’ capacity,
Despite the criticisms Mr Shettima’s pick, Mr Tinubu, at the event, said his recruitment and political decisions have always been on certain principles that are “non-negotiable”. 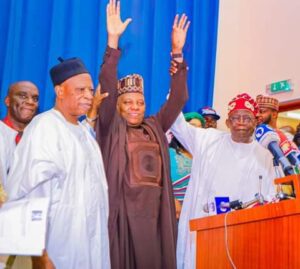 “All my life, my decisions regarding the team I am around and those I work with is guided by the principle of competence, innovation, compassion, integrity and adherence to excellence. In politics, those principles are non-negotiable. Without them, there cannot be victory, there can be no joy,” he said.
Speaking on the controversy over his faith, Mr Shettima said some persons also dispensed similar bigotry ahead of the APC primaries in June but the outcome showed that Nigerians are rational people.
“We all witnessed the decisive blows dealt the bigotry dispensed by a hopeless minority, ahead of the APC presidential primaries, last June. The futility of their propaganda, showed that Nigerians aren’t the unthinking robots some are quick to call them. Nigerians are rational beings with the capability to tell an invidious agenda apart, from sincere concern for them.
“They are not the uncritical consumers of clickbait and falsehoods, as some of us think they are. They see through the bigots, masquerading as patriots and, very importantly, they know those who represent their interests, even in the quietest and darkest of meeting rooms,” Mr Shettima said.
Also speaking, the National Chairman of the APC, Abdullahi Adamu, said even though the choice of running mate is an exclusive right of the presidential candidate, he consulted stakeholders and President Muhammadu Buhari.
He noted that the party will “wholly and unconditionally accepts his choice.”
Mr Adamu also appealed to those that contested the APC ticket with Mr Tinubu to ”purge themselves” of the loss at the recent APC convention. 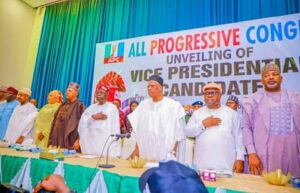 “It is time to purge ourselves of the bitterness arising from our individual losses in the party primaries. It is time to submit ourselves to the will of God and the party and do nothing to sabotage its well-laid plans for victory.
“The other political parties want what we want, and that is, to win and form the next government. So, we must not by any acts of omission or commission give in to bitterness and pettiness or fail to see the larger picture.”